Well, you might have noticed I've changed the name of my blog. I have been thinking about it for a while now and because of all the things we have planned in the near future, I thought that now was the right time to do it. It's still going to be mostly me just rambling on and on about boring country stuff but I'm also hoping to get my husband to do a couple of guest posts on things like what we have learned during all the building of poly tunnels and chicken coops and garden planning and landscaping and stuff. Technical stuff that doesn't include flowers, bunting, animals or fluffy stuff, things that he's much better qualified to write about than because he's been the one that has been doing it. I have mostly been holding stuff, passing him tools and providing tea and biccies 😊 ie.very important stuff!

So, things have been a bit hectic and frantic down here in deepest, darkest Cornwall. I have just changed jobs. I know!!  ..... it was a total shock for me too. I had spotted a job on the job site website and although the deadline had expired by about 4 weeks, I applied on the off chance because the hours were perfect and it was really local. I submitted my CV and 20 minutes later I got a call asking me to pop along for an interview the next day. Twenty minutes after I finished the interview, they rang and offered me the job! I now no longer have to work weekends! You have no idea just how amazing that feeling is after 18 months of working pretty much every single weekend. Luckily I only had to give a weeks notice in my old job and I started my new job on Monday. Talk about whirlwind!

On the poly tunnel front, great news ..... the cover is on! It's not completely finished, despite working 'til it was too dark to see on Sunday evening but the cover is on, the doors are fitted, most of it is secured with the wiggle wire, the paving slabs are down. Although there is some finishing off to do it's almost finished and the planting and growing and of course the decking out with bunting and the installing of the table and chairs and potting bench etc ..... basically the cool, fun stuff ...... can begin. I just can't wait I'm beyond excited. My bunting is ordered, my compost is waiting and my potting bench is being built by my lovely husband. 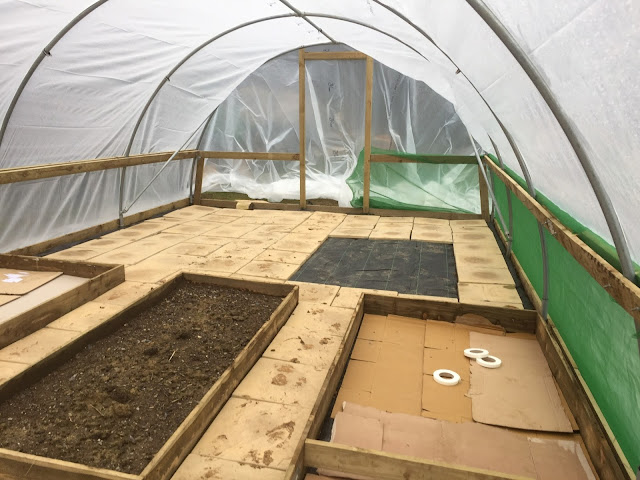 Not quite finished, it was too dark to take pictures by the time we finished and I have been at work pretty much ever since but will take a few more pics this weekend.

The plan is now to get the new garden raised beds and the poly tunnel stuffed to the brim with plants and veg for us to both eat and sell on. And therein lies the new challenges. The growing and the planting is pretty straight forward but getting my head around successional planting and things like how many of each plant to plant, where to sell what we grow, how to preserve the produce to keep us going throughout the year with as little a 'hungry gap' as possible and basically building a small business in the next couple of years ready for the next step. Luckily, we have those couple of years to practice everything before things need to get serious which is why we have worked like maniacs for the last 7 months to get things into place so the practicing can now start in earnest. 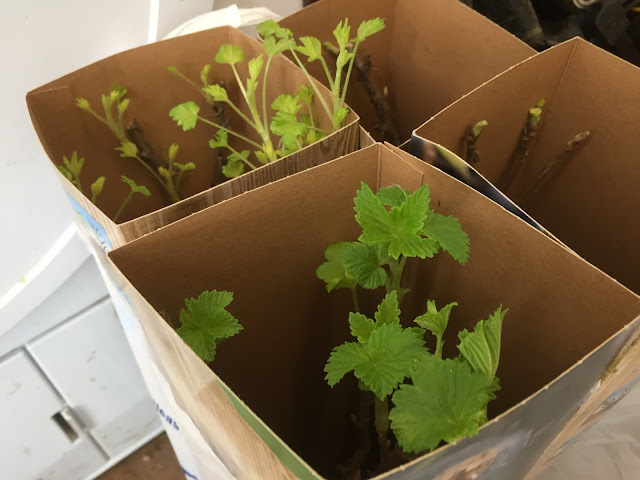 Fruit bushes ready to be planted.

I have set up an Instagram account so people can follow on there as well as on here so if you want to pop along and see what we're up to I have added a link both HERE  and on the Instagram button at the top of the page. And please, any comments, suggestions or advice will be most welcome.