Much Excitement In The Field.

Well, there was much excitement in the field last Monday with the arrival of this fabulous bundle of things. After a hernia-inducing 20 minutes lugging the whole lot through to the field because the delivery driver just dumped them in front of my house and legged it so he wouldn't have to help, I stood back and surveyed my poly tunnel bits. 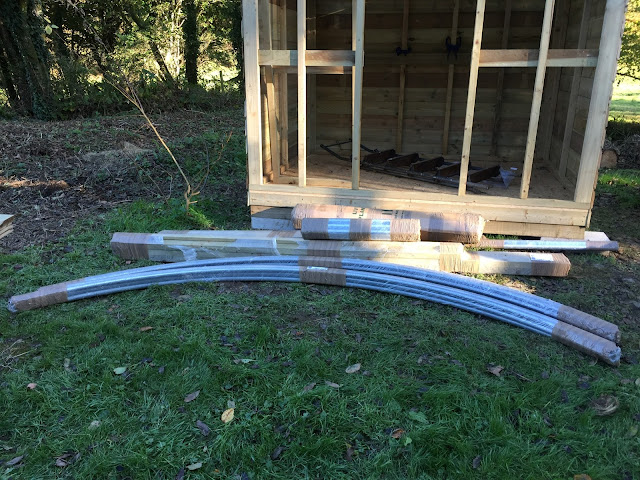 For years and years I have been saving up for a greenhouse and every time I manage to scrape together the money to buy one something comes along and I have to spend the money on something else. Not this time. This time I will be getting my indoor growing space and it's going to be epic. My poly tunnel arrived. It's HUGE! Well, the pieces are huge so I'm guessing the actual poly tunnel will be huge when it's finished. I'm thrilled to bits and I can't wait to try and get it put together, hopefully this weekend, weather permitting - although the forecast for the weekend is not looking promising, I'm still hopeful that we can at least get the frame put up. 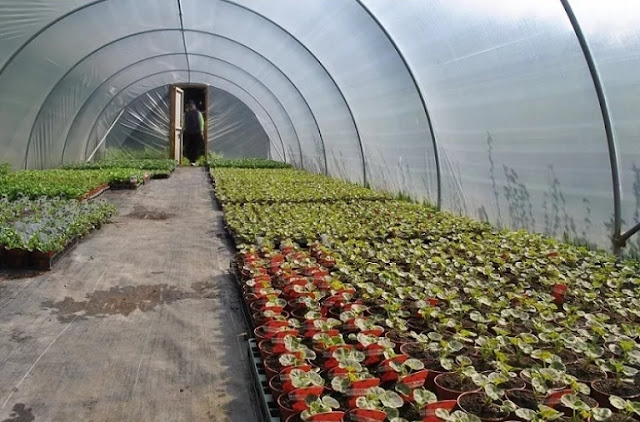 This is what it should look like, this is the photo from eBay, which is where we got it from. Our's is probably a bit smaller but not much. We fitted one of the hoops together and propped it in place and it's so big you could practically live in it!!

I have so many plans for planting things and making the inside look nice ..... I know that's a bit girly of me but nevertheless, I want it to look nice as well as being somewhere practical to grow things. I have bought a little gas camping stove and a whistling kettle so I can spend my days out there getting on with all sorts of growing and planting and harvesting ....... do I sound like a compete nutty loon about all this? It's probably because I'm hoping to be able to be so self sufficient that I can give up work and do it full time so I am very, very keen to make a go of it but I promise I will try and keep my nuttiness to a minimum :-)

I harvested the last of my beetroot a couple of weeks ago and spent the morning boiling, peeling and pickling and I eventually ended up with 4 jars of delicious beetroot. A couple of jars of normal beetroot, one jar of a pinky coloured beetroot and some that looks a bit like pickled pears but which is, in fact, beetroot. I planted mixed colours by mistake this year, normally I just plant a variety called Boltardy but I have a feeling that the mixed colours were ones that I got free with a magazine and I'm guessing I thought it was a good idea to try something new. I won't be making that mistake next year. I also made the mistake of using pickling vinegar this year instead of distilled white vinegar because I couldn't get hold of any of the distilled stuff and the spices in the pickling vinegar are a bit strong for the delicate beetroot and completely overwhelms the lovely woody, earthy taste. Another one to chalk up to experience. It's been a very steep learning curve this year and I'm guessing the next year or two are going to be even steeper. Besides, my husband didn't even notice the difference so maybe it's just me. 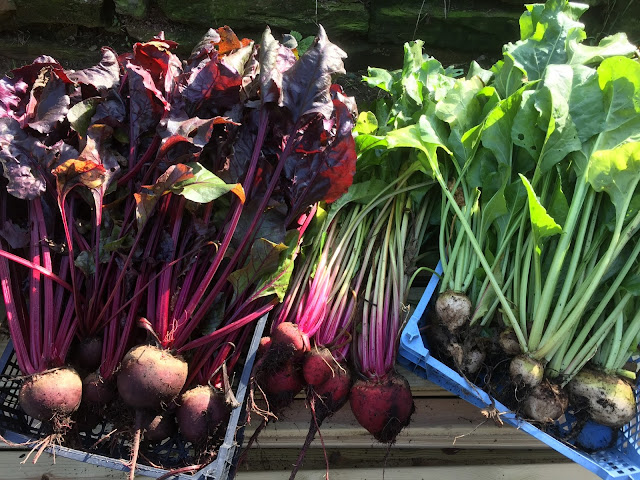 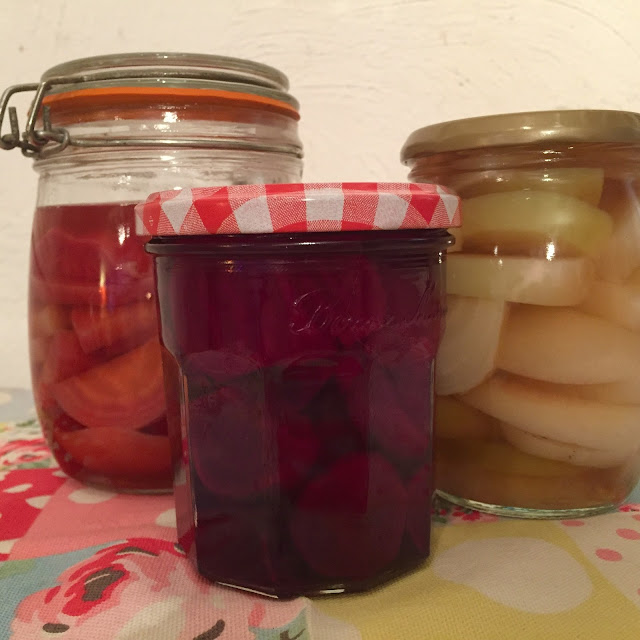 I also harvested my leeks last week and turned them into leek and potato soup for the freezer. I know it's too early and because they went in so late they were quite small but we needed the space to get the last two raised beds in place before we can start to fill them with compost over the next few months ready for next year. There will be six raised beds in all and although there is now at least four times more growing space than I had last year, I still don't think it's going to be enough. I guess we will just have to play it by ear and see how it goes. 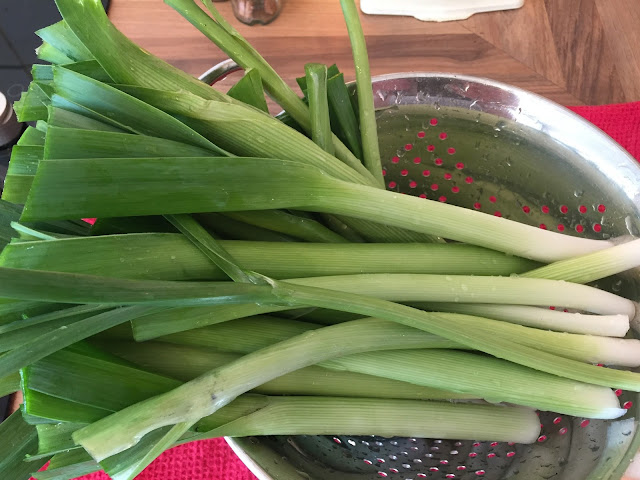 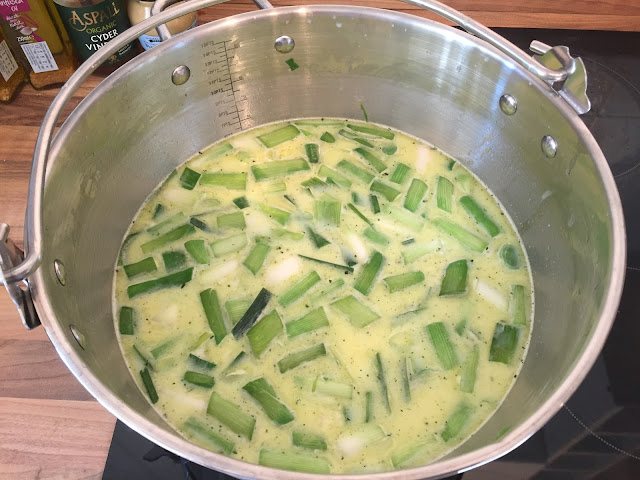 My gorgeous new preserving pan. Not only is it amazing for making jam but it's brilliant for making vast amounts of soup. It's like my very own cauldron .... I love it 😊 (I found the new emoji button thingy, how cool is that) 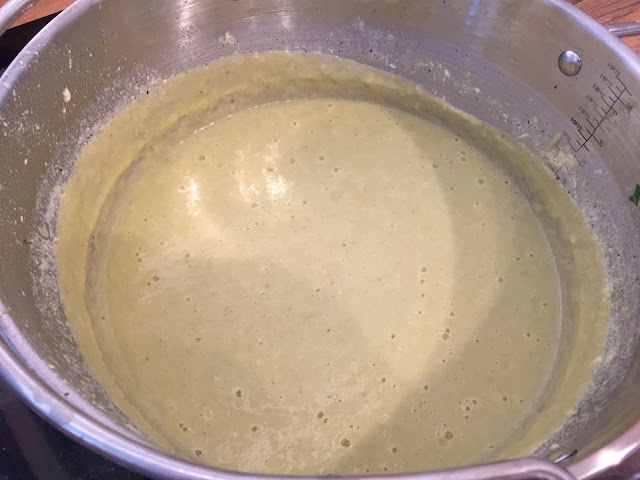 Anyway, hopefully, by next week I can post some pictures of my new poly tunnel ...... weather permitting, so watch this space.

Oh and one final thing. If anyone out there has any tips for growing in poly tunnels I would be very, very, extremely grateful. I have absolutely no clue where to start.
Posted by Kay at Tuesday, November 15, 2016 6 comments:

Over the past few months, as I mentioned before, there have been a few changes. I acquired some more chickens and I now have 5 girls. Harriet, Bluebell, Marigold, Lobelia and Poppy. 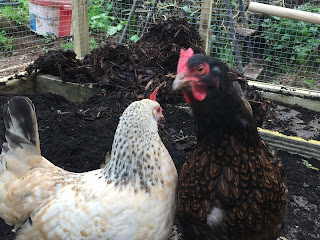 Marigold is the cream one and Poppy is the speckly one 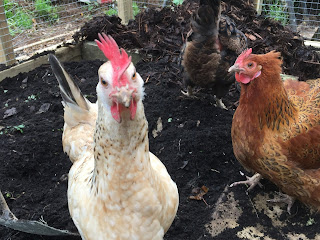 Marigold and Bluebell, the ginger one. 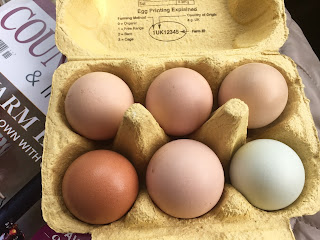 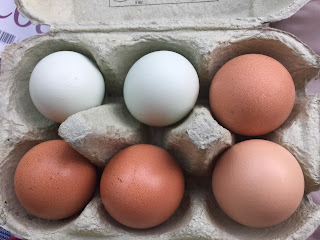 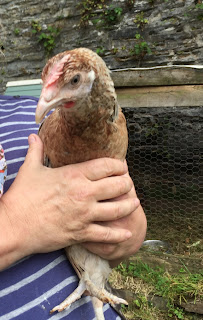 Lobelia on the day we got her and her sister Marigold
They lay the beautiful pale blue eggs in the pictures
above and Poppy lays the dark brown ones.

We built them a cute new chicken run to keep them warm and cosy in the winter when they aren't running around the garden. I like for them to be out and free-ranging as much as possible but when I'm at work I like to know they're safe so they have a secure run. They have little shelves to hop up onto, a massive perch thing with different height roosting bars which they love and they have various things to play with, one of which is their sweetcorn on a string. They totally love it. I've tried to upload a video but I'm not sure if it will work ..... fingers crossed.

We have also been building an identical structure in the field as a hay store. My husband has pretty much been building stuff non-stop for months now and he's made all the raised beds, the chicken run, the hay store and the log store. Personally I think it's just been one massive ploy to buy more power tools but hey, I'm not complaining, he's getting kinda good at it :-) 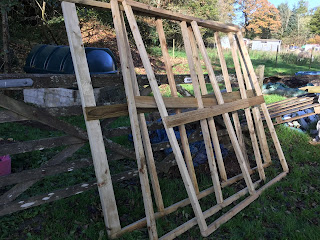 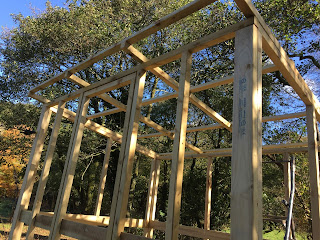 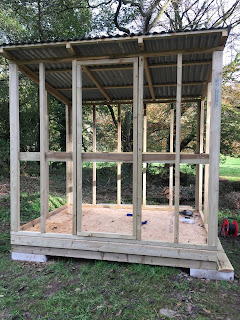 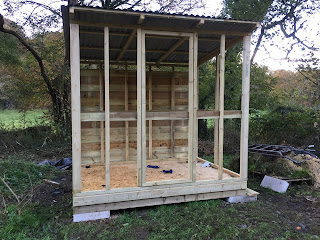 This is how far we got this weekend. Actually we did get the back and the two sides clad in ship-lap cladding but by the time we had finished, it was too dark to see let alone take pictures so I will nip out and snap some tomorrow. We only have the front and the door to clad and then some little fiddly bits to fill in and then it's done and I can start filling it with hay for the llamas to keep them happy through the winter months.

AND ......... tomorrow is a really, really, really special and amazing day. Tomorrow something fabulous is happening. Tomorrow, my new poly tunnel will be arriving. I am beyond thrilled. It's huge. It's 30 feet by 15 feet and I will be able to plant so much stuff. I just can't wait. Watch this space :-)
Posted by Kay at Sunday, November 06, 2016 2 comments: