For weeks now, every morning, I have heard a woodpecker's rhythmic drumming somewhere in the trees across the valley and for weeks now I have been trying to catch a glimpse of it, so far, completely without success. It was driving me mad. It was if the bloody woodpecker was taunting me because no matter how hard I tried I couldn't find it. In fact I couldn't even pinpoint the general location because the sound echoes round the valley making it almost impossible to be sure which direction the drumming was coming from  ...... until yesterday. Yesterday, I managed to locate the general direction that the noise was coming from and even more exciting, I actually managed to spot where the woodpecker was!! I know!! So exciting. The sound was coming from a wooden pole with either telephone wires or electric cables going across the top of it. Frustratingly, the pole is a LONG way away and I don't have any binoculars so I ran off and grabbed my camera to see if I could snap a picture and zoom it in enough to see if I could get a peek at the bird. Sadly, by the time I got back the pecking had stopped and I'm guessing bird had gone so all I got was picture of an empty pole.

This morning, while I was collecting some logs, I heard the pecking again and this time, I could actually see the bird. Having dashed back inside to grab my camera and zoomed it in as far as it would go, I was thrilled to be able to get a few shots of the pole with the bird still perched on the side of it.

This is how far away the pole is, it's the one on the hill. 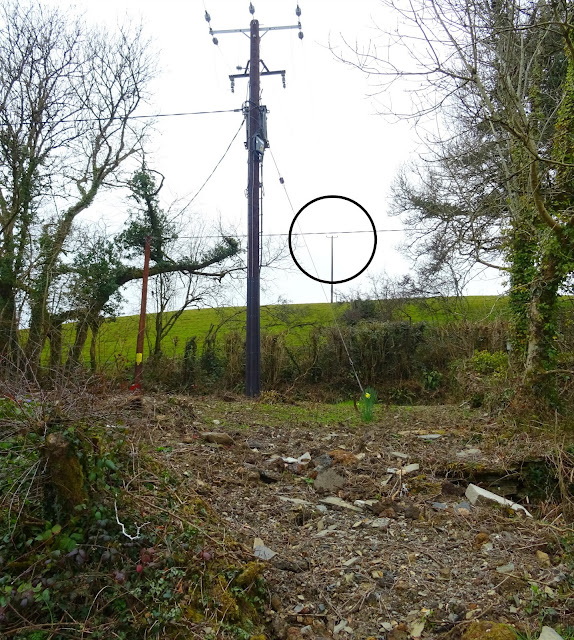 And this is zoomed in a gazillion times with my camera and then zoomed in again with my computer software. 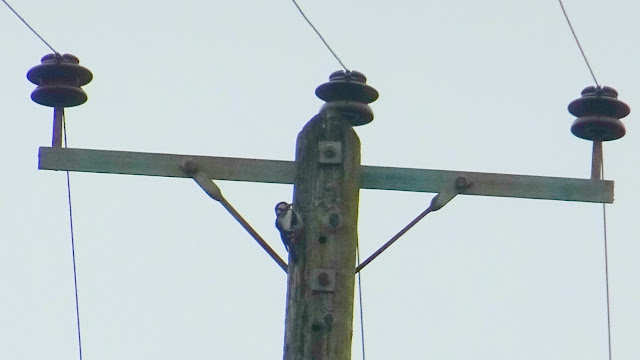 I think it's a greater spotted woodpecker because it has a reddish patch on it's stomach.
Posted by Kay at Wednesday, March 23, 2016