Feeling Out of Sorts and Home Made Scotch Eggs

Every Sunday, after checking out what's on offer at my local car boot sale, I spend the afternoon catching up on my blog reading. I love curling up on the sofa with a cup of tea reading about what everyone has been up to. This weekend, however, the car boot sale was cancelled so, after I had caught up on all the bloggy gossip, I was at a bit of a loose end. Usually, reading other people's blog posts spurs me on and gives me ideas for things to do or make but this week I found myself feeling slightly frustrated. Add to that an episode of Escape to the Country on TV featuring million pound houses and I was on the internet looking for a new house!

This is not a new thing for me. Having moved around the country every 2-3 years since I was about 19, I find that living in one place for a long period of time gives me itchy feet and the desire to move to pastures new comes along every 18 months or so. Recently though, it's been getting more and more frequent. I have been living in my house now for about nine and a half years now and as moving house is not really an option at the moment I have to content myself with moving things around and re-painting the rooms. The trouble is, at the moment my get-up-and-go has got-up-and-gone and I'm feeling totally out of sorts. I'm finding it hard to motivate myself and even making things for the market is annoying me at the moment and I have no idea what to do about it.

I did, however, force myself to make some scotch eggs. Something I have been promising myself for ages. I used some locally produced pork and leek sausages and as my chickens haven't started laying yet, I bought some free range, organic eggs from the market. I can't believe they were so simple and as a first attempt, I though they were delicious. Although, I think the oil in the pan was too hot because although they were brown on the outside the sausage meat wasn't cooked through when I cut one in half, so I popped them in the oven for about 15 mins to finish them off. I'm wondering actually if it's possible to bake them rather than fry them because I think it would cut down the fat content - any tips would be gratefully received :-) 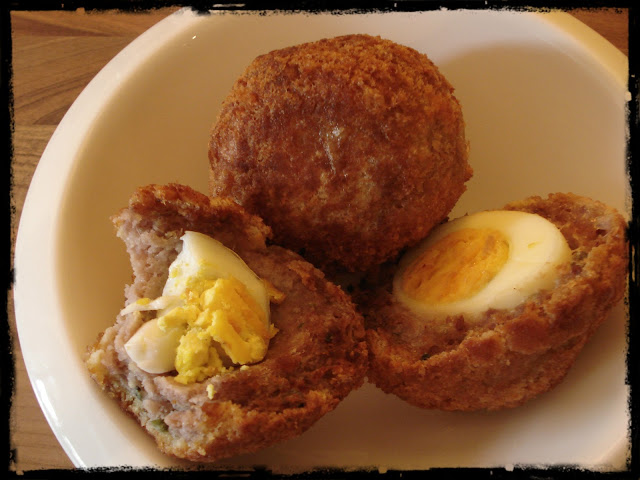