Bees and an Unusual Visitor to the Market

I have, in the past, written a couple of posts about the decline in bee numbers and other pollinators and I have also mentioned a couple of times the fact that I leave part of my field wild throughout the year to encourage insects. In addition to my wild field, this year, although not intentionally, I have also left a big part of my front lawn wild. Mostly because the grass got so long that cutting it will now involve a petrol strimmer and a bad back for a week or so! This isn't quite as bad as it sounds. I live in the countryside and whereas an unruly front lawn might be frowned upon on a neatly coiffed, well manicured, suburban estate, here in deepest darkest Cornwall it's not a big deal. It's a good job really because I have no intention of mowing any more than I have to this year. The alarming lack of insects in my garden and field at the moment is very noticeable and so far, there have been hardly any bees around and I have not spotted one single butterfly so far this year.

So, it was with great interest yesterday at the market, when the man who supplies us with local honey brought with him not only several jars but also a white padded envelope. Curious to see what he was about to show us, we crowded around the table and lo and behold, in the white padded envelope were a two white plastic containers with 15 compartments and in each compartment, along with some icing sugar solution for food, were some bees. A Queen bee, identified by the red spot on her back and some drones (I think he said they were drones) to keep her company. It was fascinating. Amazingly, the bees were delivered by next day special delivery via the Royal Mail and even more amazing was the price. £600 for 15 Queen bees! That's quite a chunk of money but I'm guessing well worth every penny if it helps the bee population recover. It will be interesting to find out how the new hives are getting on, hopefully it will go a little way to helping out the declining bee populations.

As for the unusual visitor to the market, he appeared on Thursday. All morning I was sure I could hear a peacock. Not wanting the others to think I was slightly batty, I didn't mention anything at first until I couldn't stand it any longer and went for a look around. This is what I spotted wandering around on the grass near my car. Not so barking mad after all :-) 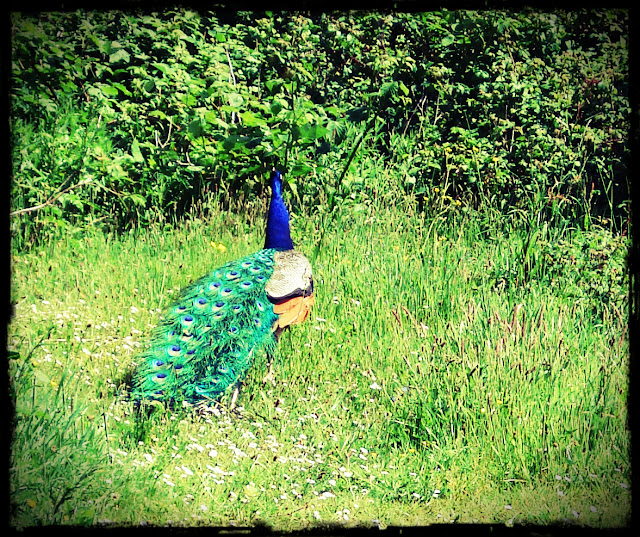