The Saga of the Trerulefoot Worms.

Wow, three posts in one week, not bad considering my track record over the last couple of months has been appalling. Actually, I'm sitting on the sofa waiting for the sun to get a little higher before I go out and start doing some much-needed gardening. My shiny new petrol mower arrived a couple of weeks ago but the minute I put the thing together, it rained. It then rained on pretty much every day off I have had since, until earlier this week when I managed to finally attack the patio, which resembled a field. The plan today is to attack the lawn, which also looks like a field. I did mow a path from the garden gate to the compost bin before I did anything else though, so I could empty the grass basket on the mower without getting completely soaked.

Anyway. You might be wondering about the title of the post, given the saga of the slow worms on the living room light fitting the other day (Hmmm I do seem to have been having a lot of sagas lately). I am happy and somewhat relieved to say that these are worms of a much less scary nature. At the market, one of the stall holders, Bridget, apart from all the fabulous local fruit and veg and plants that she sells, often comes in with some amazingly weird and wonderful items that she also sells on her stall. A couple of weeks ago, along came some terracotta worms, designed to sit on your plant pots . Since then, the worms seem to have taken on a life of their own. The people who came to the market loved them. They were bought by people from all over the country and some have even ventured even further afield, one of them went across the Channel to Disneyland and one of them is off to Africa very shortly! They have been photographed on various stalls in various guises (One now has an eye patch because someone dropped him and he lost an eye!) and things seem to be getting a little crazy. Still, it's all good fun, although just how mad the people who visit the market think we are is quite another matter.

Anyway, here are a couple of pictures of my worm, Stanley just hanging around on my stall. 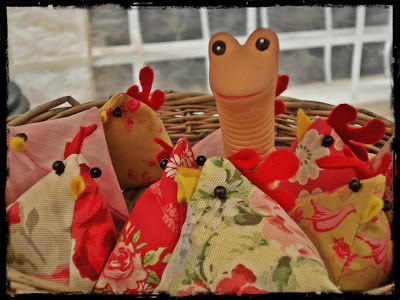 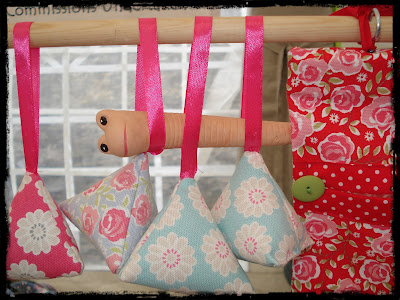 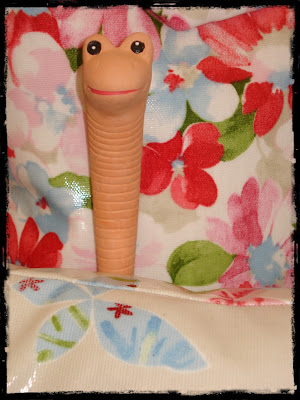 You can check out the adventures of the worms Here :-)

Right, the sun is now shining, the day is warming up, the neighbours are awake enough not to mind if I bang and clatter around too much so I am off to do some gardening. I have cucumber and courgette plants to pot on, some runner beans to plant out, more clematis to plant, a rosa rugosa plant from my friend Bridget to find a space for, some willow sticks to plant to try and screen the mess the neighbours have made putting in their sewage treatment thing and a massive lawn to tame. I could be gone a while.