Market Days and a Thrifty Supper

I realised today that it's been almost four months since I started at the Trerulefoot Local Produce Market. I can't believe it's been so long. I have to say I still love being there. My biggest problem, quite frankly, is coming up with new and different things to put on my stall and then trying to decide which of them sell well and which I should put on hold for a while. In order to try and make the most of my stall, I have tried to come up with seasonal things so, for instance, at the moment I have some oilcloth garden kneelers on my stall in the vain hope that, at some point, the sun will shine, summer will appear and people will want to do a bit of gardening. I also made some cute peg bags, again in anticipation of some sunny, line-drying weather.

I'm also working on some cute little lavender scented Cornish pixie houses. I have made a couple so far and there will be some photos to follow when I have made a few more. Maybe I will make a whole pixie village to take to the market :-)

Finally, although I now do most of my food shopping at the market now, I'm still thrifty enough to grab a bargain when I see one so when I spotted a couple of bags of reduced peppers in the supermarket the other day, I grabbed them to make a huge pot of ratatouille. It was delicious and the following day, I used what was left to make some stuffed peppers. I just added some partially cooked rice, a tablespoon of red pesto, some chopped garlic and some cubes of cheese to the ratatouille, stuffed it into the de-seeded peppers and popped them into the oven to cook until the peppers were tender. I love this kind of cooking, making meals from things I have in the house. It's a real challenge and oddly satisfying. Anyway, as I happened to have my camera handy, having been snapping away at my kitchen dresser ready for some before and after pictures (I'm going to paint it, I'm just trying to decide what colour), I snapped a quick picture of the peppers :-) 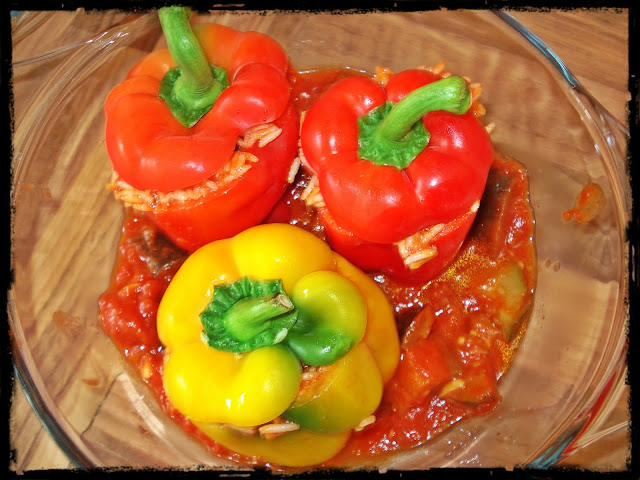