I have mentioned in the past that I love reading the daily newspapers, not only for current affairs and environmental issues, but for all the unusual and quirky stories that appear and I read everything, from the Daily Mail to The Guardian (although I draw the line at The Sun!) Yesterday, while skimming through the Daily Mail, I came across this startling headline ..... Wanted: 'Adventurous woman' to give birth to Neanderthal man'. Thoroughly intrigued, I clicked on the headline so I could read the article. Now I have to point out, when I read stories in newspapers that are, shall we say, less than scrupulous about the factual content of their articles, I make sure that I find the original source of the article before I say anything ..... basically, it stops me looking like a total idiot if the story turns out to be less than accurate.

In this case, it turns out the article is, indeed, very much factual. Homo neanderthalensis was the first extinct human species to have its DNA mapped from fragments of DNA taken from three Neanderthal fossil bones, each from different individuals. The fossils came from Vindija Cave in Croatia, and are around 44,000 years old. This means scientists can now compare the Neanderthal DNA with the genome of living humans to try to figure out how the modern human species (Homo sapiens) is genetically unique. Professor George Church of Harvard Medical School, who helped start the Human Genome Project that mapped human DNA, believes he can go one step further and reconstruct Neanderthal DNA and resurrect the species which became extinct 33,000 years ago.  All he needs is a willing human surrogate. 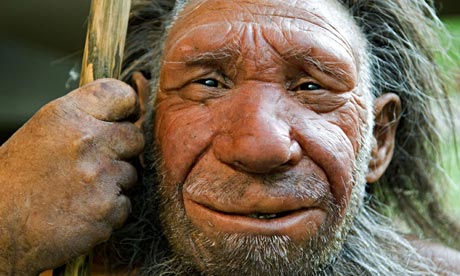 Professor Church's comments may come as a bit of a surprise to many geneticists, who believe that cloning humans is unethical and is, in fact, illegal in many countries, including Britain. He is quoted as saying “We can clone all kinds of mammals, so it’s very likely that we could clone a human. Why shouldn’t we be able to do so?” He went on to say “Neanderthals might think differently than we do. We know that they had a larger cranial size. They could even be more intelligent than us'.

Wow is all I can say to this. Did these people learn nothing from Jurassic Park? Do we really want hoards of Neanderthals rampaging around the planet? And what about the ethical issues of creating a cloned Neanderthal and then studying it, like a mouse in a laboratory ..... that's a whole new can of worms that I don't even want to think about. Now, I appreciate that it's going to be decades before anything like this is remotely possible (Prof Church says about 20 years) but in the immortal words of Dr Ian Malcom (Jurassic Park for those of you out there who aren't nerds) "Scientists were so preoccupied with whether or not they could that they didn't stop to think if they should". I would be very interested to hear your opinions on this.