Annie Sloan Mirror Makeover .... Before and After

A couple of years ago I bought a beautiful, if somewhat shabby, over mantle mirror from eBay for about £30. Some of you may have noticed that I get quite a lot of stuff from eBay .... it's rather  a bad habit of mine but there are so many bargains and I find them hard to resist ....... a bit like car boot sales :-)  Anyway, the mirror has been sitting in my spare bedroom ever since just waiting to be transformed. I have been itching to get started for ages and since I bought the Annie Sloan Chalk Paint, it's just been a case of finding the time to transform it. That time finally came last Thursday. 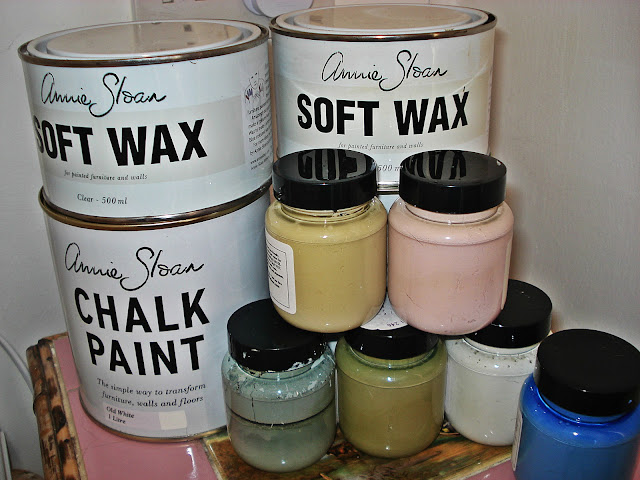 I gathered my lovely collection of Annie Sloan paints together to try and decided if I was brave enough to paint the mirror any colour other than Old White ..... sadly, I wasn't, I chickened out again and so out came the Old White. I do feel slightly annoyed with myself. I have seen many beautiful items on other blogs where clever people have used the Annie Sloan products to great effect but I'm still not quite brave enough to give it a go on something really big and something that is eventually going to be in a very conspicuous position over my fireplace in the middle of my living room. Cowardly I know, but there you go.

I know I said in a previous post that the paint is quite expensive and at £17.25 for a 1ltr can, it's much more expensive than the paint I would normally buy but, I must say, I am very impressed at how far the paint goes. I did two layers of paint on the mirror and as you can see, it's quite a big mirror and I barely even made a dent in the can of paint. I did find that I had to mix in some water though because the paint was very thick and quite hard to use, but once the water was added, the paint went on beautifully. It dries really quickly too and I managed to get the whole thing painted twice in about 4 hours. I was going to wax the mirror with some of the clear wax but I think the mirror is quite old and it's a bit rickety and I had to put parcel tape around the edge of each of the mirrors on the back because I was slightly worried that they would fall out and I didn't want to go near it with a hammer and nails, so I just buffed the mirror with a cloth to get rid of some of the chalkiness and hung it over the fire.

It's now just waiting to be decorated with some mini-bunting, some cute little knick-knacks (Yipee, more rummaging in junk shops) and it will be finished. Actually, with hind-sight, I should maybe have painted the panels at the bottom a different colour, maybe a pale grey, or even a really pale pink but that will have to wait until I can get the thing off the wall again! It was quite a job to get it up there in the first place and took two of us several attempts to get it hung and straight so, unless I can figure out a way to paint it while it's still on the wall, it might just have to stay Old White forever.

Labels: Annie Sloan Chalk Paint, Before and After, Shabby chic