A few weeks ago, my daughter Megan asked me to make some things for her to sell at her local craft fair, so, I took inspiration from my eight cats and sat down and made them some cat toys.  My cats love catnip and there is nothing more hilarious than a herd of crazoid cats charging around the house in catnip heaven (is that what a whole bunch of cats is called I wonder?) It drives them crazy ..... so with this in mind, I decided I would make some catnip toys for them. The only problem was that I didn't actually have any catnip because it hadn't arrived, so technically, they were just cat toys. My cat, who is actually named Mouse, very kindly obliged and modelled my new creations for me and the toys were a great hit even without then catnip :-) 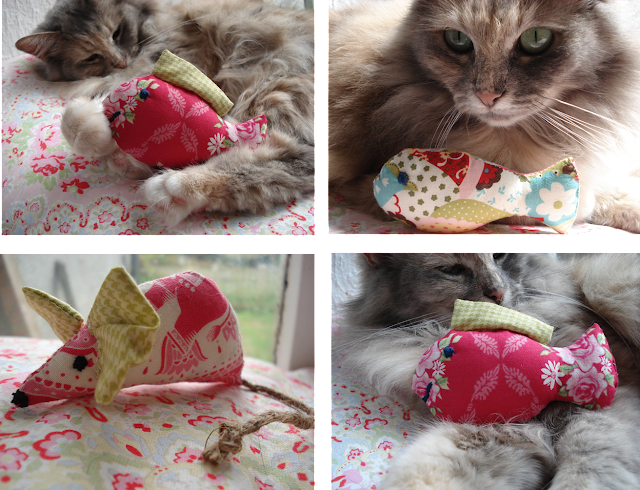 I also decided to make some lovely lavender hearts for her to sell along with the cat toys. I have to confess that my first instinct was to rush out and buy some gorgeous fabric and luscious trimmings to make the hearts, however, as I mentioned in an earlier post, my ethos is now, as far as possible,  “Use it up, wear it out, make it do, or do without”, which apparently was a New England proverb and the mantra of the women of The Great Depression in 1930's America. I had previously ordered a kilo of lavender from the internet, and when it arrived, the package was HUGE! I had no idea how big a kilo of lavender would be but lets put it this way, I could be making lavender hearts for the next 10 years and I still wouldn't have to buy any more lavender :-)

I have to confess to being a bit of a hoarder and I have a particular weakness for beautiful fabrics and trimmings, but, despite my longing to hop in Chuck (my trusty old truck) and dash off to my fabulous local craft shop, Craft Box, in Liskeard, I went for a rummage in my spare bedroom to see what I could find. I have to say I feel very proud of myself, I admit that I bought some gorgeous mini bobble trim to finish off the hearts and some thin ribbon for the hanging loops because I couldn't find anything in my secret craft stash but on the whole, everything used to make the hearts I already had. I even recycled a fantastic Pip Studios cushion cover that my daughter Katie brought back from a trip to Germany a couple of years ago and that our dog Indie managed to put a hole in when he was a puppy. I was very proud of myself for not succumbing to the temptations of the craft shop and I really love the hearts.
Posted by Kay at Sunday, October 21, 2012