A Spot Of Gardening

Well, the weather is lovely again after a few dank and miserable days so I have been trying to make the most of it by getting out into the garden to do a bit of weeding and a bit of planting. My gardener is coming today to finish off the lawn and the patio .... I know, I know, it sounds lazy and financially wasteful but actually it's not. My knee still gets sore when I'm walking on uneven ground and basically, my lawn is like a field so I have come to the conclusion that the only way to keep on top of it is to pay someone to come in once a month and do it for me. It might mean a bit of belt tightening but it's totally worth it to avoid the looks of disgust coming from certain new neighbours who seem to think that they have a right to express an opinion on how my garden should look.

My veg are coming along nicely. I'm eating cut and come again salad leaves every day now and it's nice to be able to just go outside and pick a few leaves when I want them. I know that I cheated a bit when I bought my initial starter pack from a local supermarket but the ones I planted myself are now coming through so it won't be long before I can start eating those.

Last week, I also bought some boxes of wild flower seeds that were reduced to 99p. So, after a spot of vigorous weeding, I sprinkled them all over the flower bed. I'm hoping for a riot of bee and insect friendly flowers to appear and magically transform my sad looking flower bed into a riot of cottage garden colour. I'm not holding my breath :-) 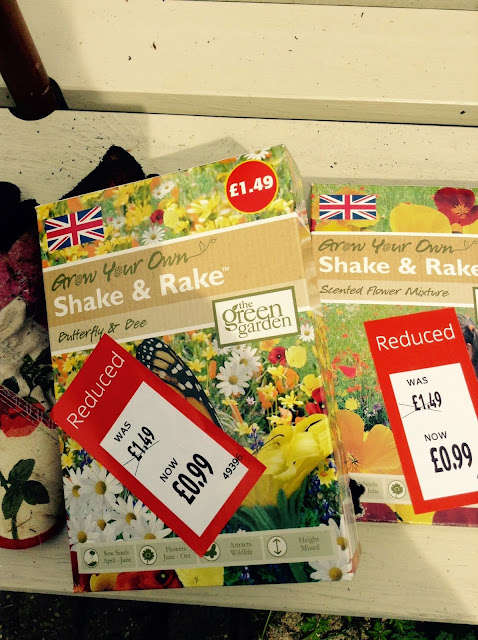 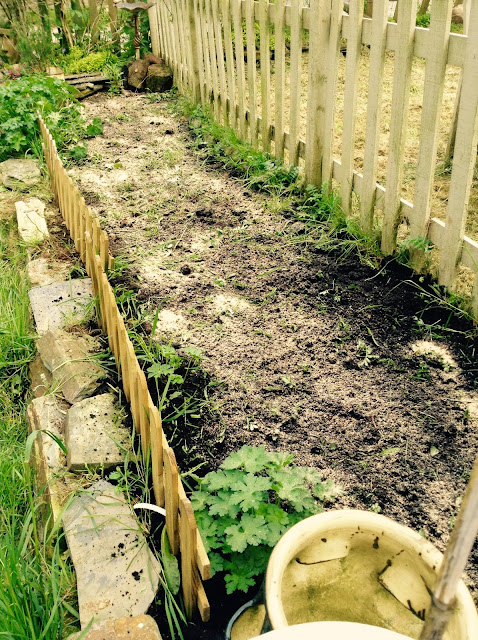 After I sprinkled them liberally over the ground, I raked them over and just as I was about to water them it rained, saving me a job and in between showers, I managed to get the two little rockery plants I bought from my friend Bridget at the market into the ground as well. I also planted what I think is a another rockery plant that has been sitting forlornly in a pot on my potting table. Initially I thought it was dead and was about to throw it on the compost heap, however, it's miraculously sprung to life again and although I have no idea what it actually is, I have a vague feeling that it gets tiny pink flowers on it so I popped it into the little wild rockery bed too. I built this little bed because when I had my two gateposts built, the men who build them just dumped a mound of soil there and left it. Rather than move it, I fetched some of the slate that I dug up from my field and built a wall around the pile of soil and levelled it off to make a cute little flower bed. I did one by the side of the other gatepost too .... I'm all for making lemonade when life gives you lemons 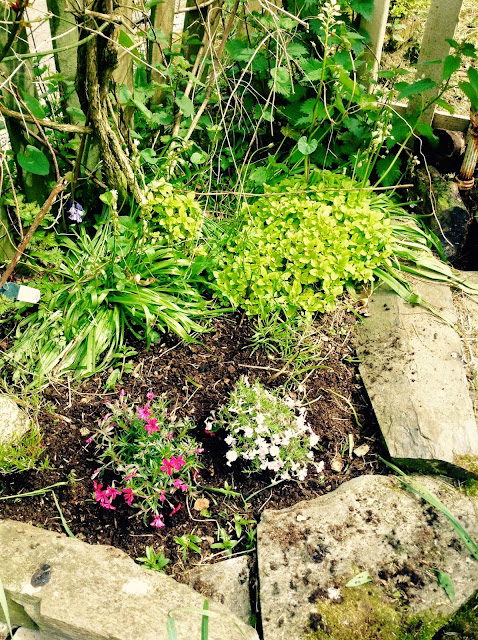 The other one is kind of like a little woodland flower bed. I have no idea what the variegated plant is. It was a clump given to me by a friend and it's amazing stuff. It spreads like mad and gives fabulous ground cover which keeps the weeds down and it has lovely variegated leaves and sweet little purple flowers. There is also another plant that's popped up, I have no idea what it is ........ no doubt you're beginning to see a pattern emerging here! The thing is, I get lot of plants given to me by a friend from the market that are a bit too past it to sell but all they need is a bit of TLC to make them spring back into life again , which is great for me and my garden but, the trouble is, I can never remember what they are. 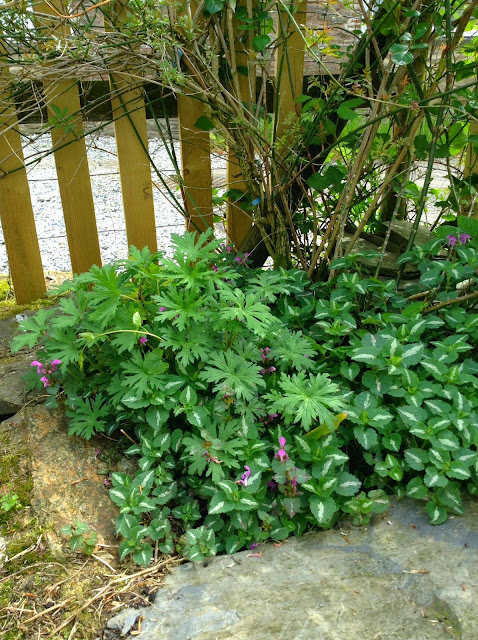