I have been asked by a couple of people to post the recipe for the All Bran cake that I showed in a post last Friday. It's really simple, it's also fat free and it's great for using up any All Bran that might have gone a bit soft and lost it's crunch because once it's soaked in the milk no one will be able to tell. The recipe says cups. It doesn't necessarily have to be a standard "cup" measurement. What it actually means is .... grab a cup or a mug and as long as you use the same cup or mug for all the measurements it will be fine. Just remember though, the bigger the cup or mug, the bigger the cake. Also, in the recipe it says use mixed dried fruit but I don't particularly like the mixed peel part of he dried mixed fruit so I added some glace cherries and some chopped dates but you can add currents, sultanas or whatever you fancy. A tip I got from The Barefoot Contessa is that if you coat your fruit in a dusting of flour, it stops them sinking to the bottom of the cake. Now I have never actually tried because usually, my fruit doesn't sink to the bottom but if anyone has tried this ..... I would be interested to know if it works or not. Anyway, here is the recipe, it's probably the simplest cake you could possibly make and I think it tastes fabulous sliced and spread with butter. Delicious! 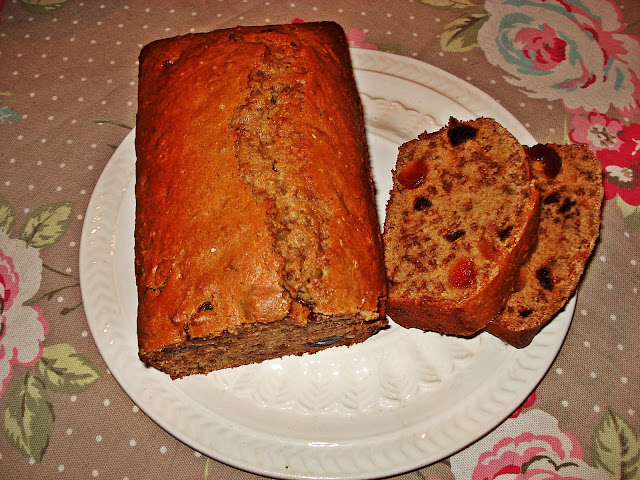 1 cup of All Bran
1 cup of mixed dried fruit (or whatever you fancy)
1 cup of milk
Three quarters of a cup of sugar ( I use a combination of white and brown sugar so it's not too sweet and obviously if you don't like it too sweet add a little less sugar)
1 cup of Self Raising Flour.

Bake on the oven on 180C, 350F of Gas 4 for about an hour or until the top is golden and a skewer comes out clean.