Today, I spent a fantastic morning wandering around the Liskeard Show which takes place each year in July. Except this year, when it had to be postponed due to the fact that it has rained in Liskeard since April and has hardly stopped.
It's only the second time I have been to the show, despite living in Cornwall for the best part of 15 years. About 5 years ago I took some of my llamas to the show and had a fabulous time chatting to everyone but I didn't get a chance to have a wander round and every other year I seem to have been working but this year I have been able to go and have a really good look around.

I was under the impression that the lanes around the show get very busy very early, country folk being early risers and all that, so I decided to get there reasonably early. Having checked out the opening time ..... 8am ......  I decided that getting there at 9ish would be a sensible time to arrive. Not too early so I was the only person there but not too late so I had to queue for ages to get in. Well, at 9am the place was like a ghost town! It was almost empty. The people on the gate were falling over themselves to help me, take my entry fee, point me in the direction of wherever I wanted to go and generally be as helpful as they possibly could. A nice change from the troglodyte tourist contingent that inhabits much of Cornwall at this time of year. I started in the domestic marquee which has all the competition entries for things like the cake baking competition, the craft section and the flower arranging. It was fabulous. I have never seen so  many Victoria sandwiches, fruit cakes or scones in one place at one time, nor have I ever seen so many different types of jams and pickles. There were crafts galore, cooking demonstrations, gun dog displays, show jumping events, falconry, shire horse displays and even a carriage driving event. 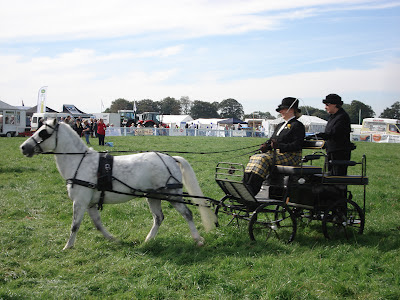 But I have to confess that although I love the crafts and the competitions, I love the animals the most. Oddly enough, after the horses and alpacas, which I absolutely love, I really love the cows. I have no idea why but there is just something about them that I find very appealing. The people at the show who are exhibiting their animals are, for the most part, extremely friendly and although you get one or two who are a bit precious about their beloved animals, most of them are happy for you to get up close and hands on (my favourite part). The only downside to this is that the owners  can be slightly obsessed and once they start talking they don't stop but that's  ok, I have been know to wax lyrical about my animals too on occasion :-)
Here are some pictures form the 109th Liskeard Show. I can't wait for next year :-)