A Fence, A Flower Bed, Some Veg And An Electric Cable 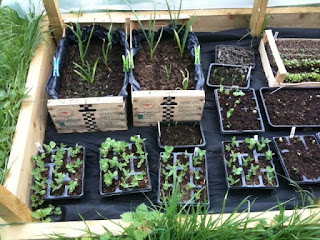 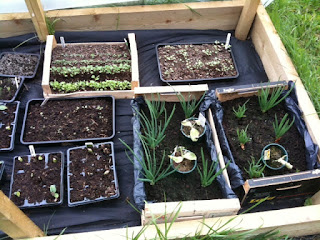 Well it’s been a while since my last blog post and I have a lot of catching up to do. I built a fence, dug a flower bed, panted some more veg, painted my gate posts and almost electrocuted myself ……. but more about that later. Firstly, a bit of an update on my biodynamics experiment with my garlic. As you might remember, a few weeks ago, I planted 14 cloves of garlic. Seven of these cloves were planted in accordance with biodynamic principles on the correct planting day for planting root vegetables. The other seven were planted on a day which biodynamic principles suggest should be used for planting fruits. The theory being that the garlic planted on the correct day should and be more abundant and produce a bigger crop than the ones that were planted on a day not meant for planting garlic. As you can see from the photos, there doesn’t seem to be very much difference in the size of the plants. A couple of cloves in both boxes didn’t grow at all and there seems to be equal amounts of growth in each box. I’m still keeping an open mind until I can harvest the garlic to see if the yields show any significant difference but I suspect that I will find that there is little difference in growth between the two boxes. There are several reasons I can think of that could account for this, however, I will save my theories for after I have had a chance to look at the crop.Right, let’s get down to business. What else have I been up to? I have planted more veg, I managed to get tomatoes, courgettes, cucumbers, peas, mange tout, beetroot, sweet peppers and a whole host of other yummy vegetables planted over the last couple of weeks. Most of them have been started off in the raised bed which I covered with the polythene sheeting …. Now known as my “polybed” and they all seem to be growing nicely. I also planted some sweet peas, some triffid like bulb things that I bought from a local shop last year and didn’t want to waste and I bought several perennial cottage garden plants to put in the new flower bed I created in front of the new fence I built.

As for the fence, it’s to keep my three dogs out of the veg patch because they absolutely love digging up my veg and think it’s hilarious to run around the garden with a leek or a cabbage in their mouth laughing at my feeble attempts to retrieve said plants. Having never built a fence before it was a real baptism of fire but even though I say it myself I think I did a nice job. I even used “Postcrete” to fix in the posts rather than just bashing them into the ground and crossing my fingers – although a note on this. After making the decision to cement the posts into the ground, I bought a bag of postcrete from Mole Valley Farmers to give it a go as I’d never used anything like that before. I dug a hole, filled it with water as directed, poured on the Postcrete and hey presto 5 minutes later a nice solid upright post. Fantastic stuff!! After I had used all of the first bag of Postcrete I decided to nip off to Homebase and get another couple of bags to finish off the fence, only to discover that Homebase don’t stock Postcrete, however, they do stock “Postfix . I was assured by the sales assistant that it was exactly the same product just with a different name, and as I didn’t want to wait until the following Monday to get some from Mole Valley, I bought 2 bags and set off home to carry on building my fence. Having already completed one fence post and now considering myself somewhat of an expert on all things post/concrete related, I dug the hole, poured in the water and poured on the postfix as directed. An HOUR later…… all I had was a wobbly, wonky fence post that was never going to support the fence panels despite the fact that the panels were not particularly heavy. To say I was rather grumpy was a bit of an understatement so I loaded the unopened bag and the half used bag back into the car and set off to Homebase. To be fair, and to their credit, Homebase were wonderful and refunded the cost of BOTH bags of Postfix without a moment’s hesitation even though one bag had been half used. So ….. note to self …….Buying a cheaper alternative to Postcrete is a waste of time and money and it’s worth sepnding the extra 50p, or whatever it was, per bag to get the real deal. 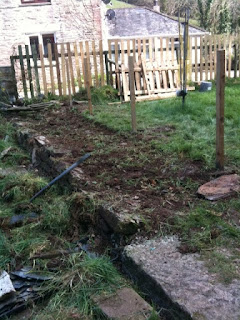 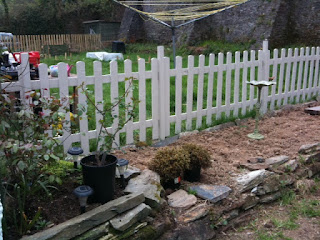 I put the fence far enough back from the patio for me to dig a nice flower border in front of it to plant some lovely cottage garden flowers up against the new fence and this is how I came to almost electrocute myself! I was happily digging away, thrusting the spade down into the soil to strip of the turf and dig over the soil ready to plant lots of lovely cottage garden plants in front of the fence and I kept finding bits of yellow plastic with black writing on. Thinking that the guy who converted the house back in the early 80’s, who was the living embodiment of a cowboy builder, had just put plastic bags down to suppress the weeds rather than digging them out, I carried on in blissful ignorance. Half way down the border, after finding more plastic and unearthing several big lumps of slate placed in a straight line, I had a sudden epiphany. Grabbing the pieces of plastic, I took a closer look and after piecing together all the plastic I was able to make out the following letters. DAN__R O_ ELECTR_______! Roughly translated …….. DANGER OF ELECTROCUTION!!! It suddenly dawned on me that the cable for the electric pump that brings the water up from the well and into the water tanks that supply the water for the seven properties in the area, was directly under the slate in the flower bed that I was digging with vigorous abandonment. It was more by luck more than judgement I had managed to avoid hacking through it with my spade, cutting off the water supply and killing myself …….. Phew
Posted by Kay at Wednesday, April 11, 2012