As I mentioned in a previous post, I currently have eggs in abundance thanks to my two lovely chickens laying two eggs a day and, after scaring the poor septic-tank-emptying-man half to death with my wild woman impression, I thought I should try and find ways of using the eggs in a slightly less alarming manner. 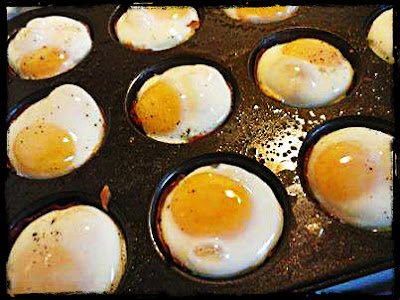 1) Spray the muffin pan with nonstick spray or grease with a little butter.
2) Place a slice of ham in the bottom of each muffin well.
3) Place about a teaspoon or so of diced tomatoes on top of the ham.
4) Sprinkle some shredded cheddar cheese over the tomatoes.
5) Break one egg into each spot.
6) Sprinkle a little bit of salt and pepper on each.
7) Bake at 180/350 degrees for 18-20 minutes or until the yolks are as firm as you desire and the whites are cooked through. 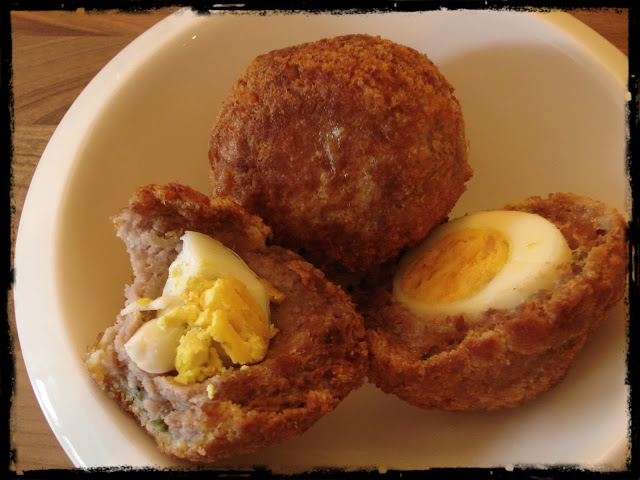 Eggs - however many you need
Sausages - 1 sausage for each egg, I used pork and leek sausages in the ones I made in the picture.
Breadcrumbs - a couple of slices of bread, preferably a bit on the stale side, whizzed in a food processor to make crumbs
1 beaten egg for coating.

1) Hard boil your eggs and cool in cold water when done.
2) Take the skin off a each sausage in a pack of your favourite sausages.
3) Whizz the bread in the food processor to make breadcrumbs.
4) Flatten out a sausage and mould it around the hard boiled egg making sure it's covered.
5) Dip the sausage covered egg in the beaten egg and then roll in the breadcrumbs until completely covered.
6) Place on a baking sheet and bake in the oven at 190 C / Gas mark 5 oven until lightly browned, about 25 minutes. 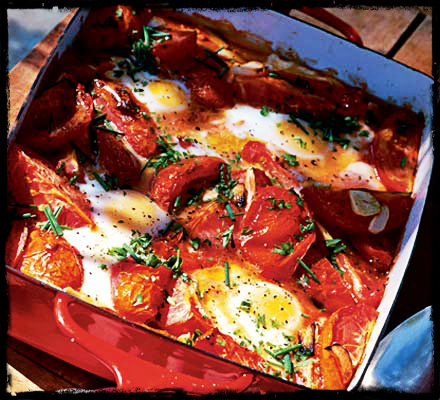 1) Preheat the oven to fan 180C/ conventional 200C/gas 6.
2) Cut the tomatoes into quarters or thick wedges, depending on their size, then spread them over a fairly shallow 1.5 litre ovenproof dish.
3) Peel the garlic, slice thinly and sprinkle over the tomatoes.
4) Drizzle with the olive oil, season well with salt and pepper and stir everything together until the tomatoes are glistening.
5) Slide the dish into the oven and bake for 40 minutes until the tomatoes have softened and are tinged with brown.
6) Make four gaps among the tomatoes, break an egg into each gap and cover the dish with a sheet of foil.
7) Return it to the oven for 5-10 minutes until the eggs are set to your liking. Scatter over the herbs and serve piping hot with thick slices of toast or warm ciabatta and a green salad on the side.

This is en extremely cheap and easy supper but it is totally delicious. I like to add some grated garlic to the tomatoes but that's just because I love garlic. You could also add some chopped bacon if you like or some diced ham. I also like to use some anchovy fillets draped over the top and I usually sprinkle some grated cheese over the top of everything once they are almost cooked and pop it back in the oven so the cheese melts and bubbles. 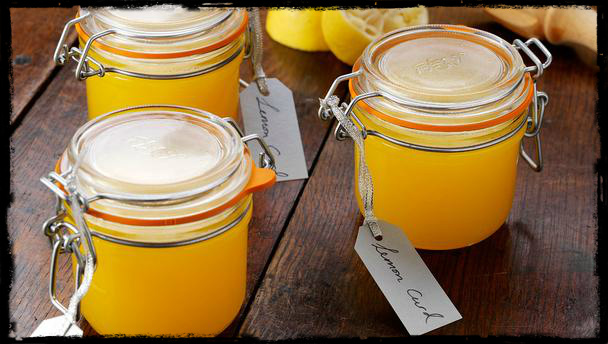 1) Put the lemon zest and juice, the sugar and the butter into a heatproof bowl. Sit the bowl over a pan of gently simmering water, making sure the water is not touching the bottom of the bowl. Stir the mixture every now and again until all of the butter has melted.

2) Lightly whisk the eggs and egg yolk and stir them into the lemon mixture. Whisk until all of the ingredients are well combined, then leave to cook for 10-13 minutes, stirring every now and again, until the mixture is creamy and thick enough to coat the back of a spoon.

3) Remove the lemon curd from the heat and set aside to cool, stirring occasionally as it cools. Once cooled, spoon the lemon curd into sterilised jars and seal. Keep in the fridge until ready to use.

This definitely beats anything you can buy in the shops and can be made with different fruits such limes, grapefruit and even strawberries, which gives it a consistency of kind of a fromage frais and is delicious if you eat it with shortbread. I also use this lemon or lime curd in my sponge sandwiches instead of jam when I want something a little bit different.

Does anyone else have any favourite egg recipes??
Posted by Kay at Wednesday, August 21, 2013