A few days ago, I slipped in my field and hurt my knee quite badly, leaving me with no choice but to sit and rest it on the sofa until the swelling goes down. Add to this that fact that everything in my house that could possibly break down did and you can begin to understand my feelings of frustration. It all started about eight weeks ago when my hideously vile next door neighbour banged on my door and told me that my boiler was causing a fire. I rushed to the kitchen to see black, sooty smoke pouring out of the vent at the back of my house and immediately scrabbled to turn everything off. Unfortunately while it wasn't actually causing a fire it was definitely un-usable. On the plus side, it's summer (or at least it's supposed to be) and the need for heating is minimal. Hot water, on the other hand is an essential commodity so for the last eight weeks I have had to resort to switching on my immersion heater in the morning so that I can have a shower. Mindful, however, of the cost of doing this I have limited the heater time to just 30 minutes a day and this has resulted in more cold or lukewarm showers than I can count. In addition to this, my tumble dryer started making a very loud grating noise and had to be replaced and I had to get the pest control people in to deal with a wasps nest in the roof space in my porch. I finally managed to scrape together the money for a plumber to fix my heating when my ceramic hob broke and cracked from one side to the other for no apparent reason. The following day, my microwave started sending out sparks and I am now having to cook just using my oven until I can afford to buy a new hob and/or microwave, I discovered that my hoover was clogged with awful oily soot  that is impossible to clean because the plumber used it to finish off hoovering out the boiler because the bag in his Henry was full and he didn't have a spare and to top it all and my toaster has broken.  Suffice to say, it has been a pretty awful few months and I'm hoping that the run of bad luck is now over ...... although I'm not holding my breath!
On a positive note, I have loads of tomatoes on my two Totem tomato plants and I have five apples on the apple trees I planted this year.  Ok it's not much to show for a whole lot of back breaking work but I also have some great shallots and some garlic that I managed to salvage from the  soggy, slug infested mush that is my raised beds. Other than that, my veg growing this year has mostly kept the local slug and snail population well fed! Anyway, as I don't want to post pictures of broken stuff, I decided to post some optimistic pictures during an all-too-brief sunny spell here in Cornwall. 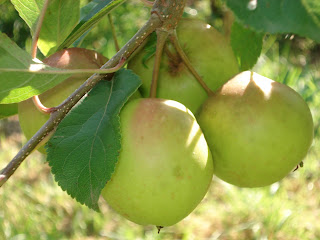 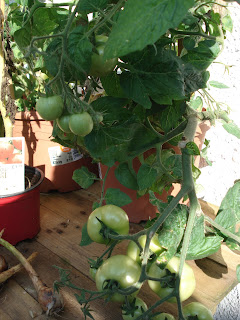 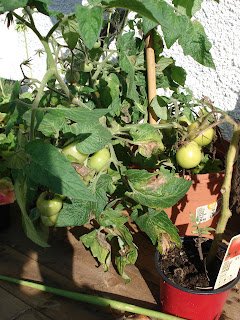 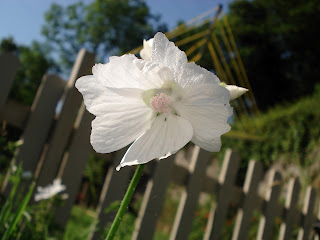 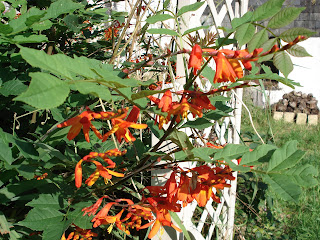